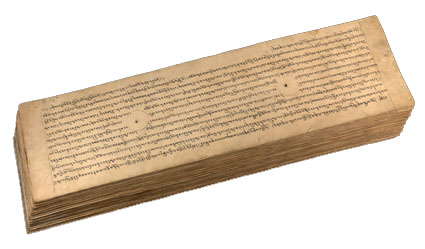 This huge book (IOL Tib J 105) contains a Buddhist sutra in the loose leaf format known as pothi. The pothi was invented in India, where palm leaves were used for the pages. Along the Silk Road, Buddhist bookmakers used the Chinese invention of paper (which had not yet reached India) but kept the Indian pothi format. The Tibetans inherited this hybrid book from the Buddhists of the Silk Road.

The manuscript is a copy of the large Perfection of Wisdom (Prajñāparamitā) sutra. It was written as a joint effort by a team of Chinese and Tibetan scribes working together at Dunhuang in the early ninth century. In fact, although all of the scribes wrote Tibetan, the majority of them were Chinese. Apparently, under the rule of the Tibetan empire masses of Chinese were trained to write in Tibetan. Discipline was tough–on that, more later.

The book was an expensive production that would have to have been sponsored by a wealthy donor. This donor may have been the king of Tibet himself: another manuscript (Pelliot tibétain 999) mentions that the Tibetan king Ralpachen (ruled 815–838) sponsored the copying of hundreds of sutras, which were kept in a temple near Dunhuang.

1 thought on “Tales from the scriptorium I: expensive books”