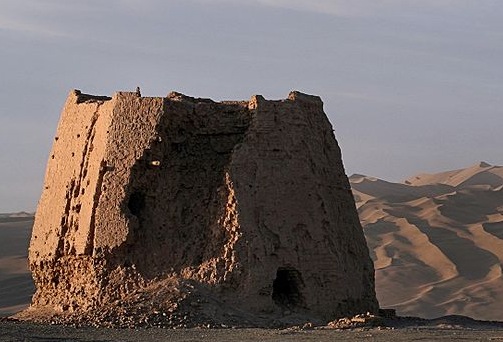 I’m a little worried that I might have suggested in previous installments of this “Decline of Buddhism” series that the downfall of the Tibetan empire was a direct result of the assassination of the Tibet emperor Lang Darma. This may be true in a sense, but many Tibetan historians (and most modern ones) see this as just one stage in a series of unfortunate events. The next stage was the division of the empire between two disputed successors. Almost every previous succession to the Tibetan imperial throne had been disputed, but one side had always come out on top. This time neither side was strong enough to subdue the other, and so the country was split in two.

The next stage of disintegration was a series of uprisings (the Tibetan word is kheng log) against the prevailing authorities, setting Tibetan clan against clan. The first of these uprisings happened just around the corner from Dunhuang, the home of our manuscripts.

While Tibet was splitting in two in the mid-ninth century, a civil war broke out in the Gansu region, near the border with China. An aristocrat from the Ba clan called Khozher gathered his own army and set himself up as a local warlord. He spurned the authority of the local Tibetan governor, claiming that the governor’s clan (the Dro) had orchestrated the murder of Lang Darma, and that it was his duty to take revenge on such rebels.

Khozher also portrayed himself as a kind of nationalist, fighting against the resurgent Chinese forces in the area, but in his brutality (he had every male in the whole region put to the sword) he left little hope of a better alternative. The people turned against him, and most of his army deserted.

The incorrigible Khozher set out for China, boasting that we would return with hundreds of thousands of Chinese soldiers. But when he offered his submission to the Chinese emperor in return for an imperial post, he was rejected. Khozher was finally ousted when the a local Chinese warlord swept through Gansu province. Though no longer a force to be reckoned with, he continued to cause trouble, and when he was eventually, and inevitably, put to the sword, his severed head was taken to Chang’an as proof that this troublesome warlord was finally dead.

Such was the first uprising, and the end of Tibetan rule in Gansu.

All of which brings us to another prayer for Tibet…

Recently we looked at a prayer for the protection of Tibet that seemed to date back to the Tibetan imperial period. This time let’s look at a prayer that seems (to me) to date from the troubled period of the uprisings and the ‘dark age’ that followed.

This prayer is actually part of a Vajrayāna empowerment ritual (IOL Tib J 752). That in itself suggests that it probably comes from the tenth century, when most, if not all, of the tantric manuscripts at Dunhuang were written. This time, instead of a prayer to eliminate the opponents to Tibet, we have a prayer to pacify the troubles within Tibet itself. “Please bring peace swiftly,” is the plea, “to the conflicts in the kingdom of Tibet.” The key word here is “conflicts”, which is khrug pa in Tibetan, defined in various dictionaries as a fight, dispute or conflict, and particularly in the Great Treasury of Words, as “a mixing up of the established order”. This is, I think, comparable to the idea of “uprisings” (kheng log).

So here are the tantric practitioners at Dunhuang, surrounded by clan-on-clan violence, praying for peace (and failing that, a firm helmet):

Please bring peace swiftly to the conflicts in the kingdom of Tibet. And then please grant long life and a firm helmet to a king who protects the dharma. As for the enemies who threaten us (such as the enemies of the Vajrayāna and those who obstruct the virtuous ones gathered here in our maṇḍala, and all of those who harbour poisonous thoughts), please subdue them with the appropriate one of the four enlightened activities…

And here you can read about a prayer for peace in Tibet in troubled times a thousand or so years later.

* Note that calling Tibet a “kingdom” (rgyal khams) is not unprecedented, and we also find the same phrase bod rgyal khams in the prayers for the Dega Yutsal monastery (PT 16). The phrase that is translated here as “a firm helmet” (dbu dmog brtsan) also appears frequently in PT 16, as well as in some of the pillar and rock inscriptions from Central Tibet. It has powerful resonances of the divine right of the Tibetan tsenpos, difficult to communicate in translation. I detect in this prayer a hope that the tradition of the Buddhist tsenpos will be revived by some unnamed king.

References
On the uprisings in general see:

On the conflicts near Dunhuang, see:

And for a nice account of both see Chapter 2 of:

11 thoughts on “The Decline of Buddhism V: A prayer for the dark age”