Astrology was, and surely still is, an important part of life in Tibet. As in most other Asian countries, astrology played the vital role of deciding whether to carry out an important activity – a journey, a marriage, a funeral, a battle – and which days were best for embarking on such activities. Tibetan astrology is often said to be a combination of Chinese and Indian astrologies. According to one history, it was the tsenpo Tridé Tsugtsen who introduced Chinese astrology to Tibet in the 8th century. The influence of Indian astrology comes mainly through the Kālacakra tantra I believe, from the 11th century onwards.

There is an old saying, going back to the time of the Tibetan empire, that characterises Tibet’s neighbours according to their special talents (at least in Tibetan eyes):

Tibet already had a divination method that had little to do with Chinese astrology, in which dice were used to consult oracle deities – the ancestor of the mo divination still practised today. But the study of the stars and their portents was something the Tibetans encountered, and apparently were impressed with, in their early contact with China.

Now I wouldn’t be venturing into an area of which I know so very little, were it not for an amazing and totally unexplored manuscript from the Dunhuang cave that looks like the earliest Tibetan text on Chinese-style astrology – Or.8210/S.6878. It’s been written on the back of a Chinese sutra, and since it was filed along with the Chinese scrolls, the Tibetan side was ignored. How, I don’t know. It’s full of diagrams and ends with the rather strange tortoise that graces the top of this post. So I will say a little about this manuscript, and hope to learn something from anyone who knows more about the subject and is kind enough to comment.

The first diagram comes under the heading “divining the good and bad dates for beginning a journey.” The first result is this:

When the day falls in the “gate of the sky”, if you go on a long journey, it will be good and auspicious.

I guess it’s not so difficult to do this astrology after all – just check the day of the month against the diagram, and read the result. There are bad days too:

When the day falls in the “junction of the sky”, wherever you go a great loss will occur – very bad.

The word I translated as “loss” is god ka, which usually means a financial deficit, so I have the feeling that the main purpose for making this astrological calculation is to check on the possible success of a journey for the purpose of trade. That is, travelling merchants (not scarce on the Silk Route) would ask an astrologer (probably a Buddhist monk) to check the best days for embarking on a journey. I say “probably a Buddhist monk” because these astrological diagrams have been written on the back of a Chinese Perfection of Wisdom sutra.

Other diagrams on the scroll contain the twelve animals of the Chinese and Tibetan zodiacs, and underneath is the phrase “If the male and female are joined in this way…” The animal years in the Tibetan calendar always come in male or female form (usually the even-numbered years are the male ones, and the odd-numbered years the female). Note that in the diagram here the animals are divided into pairs. This could be a combination of the animal of the current year with the animal of the day, or of one’s birth year, but I haven’t been able to work this one out yet.

And what of the star animal of this manuscripts – the golden turtle? Well, in early China (I mean the Han dynasty if not earlier) the main methods for divination were to use bones, yarrow sticks and turtle shells. It was the ability of the turtle to live to a great old age that attracted people to it. Turtles from the Yangtse River were thought to have divine powers, and those over a foot long were believed to be a thousand years old. In their age they represented wisdom and – unfortunately for the turtles – longevity, with the inevitable result that they were eaten as a remedy for the problems of old age. Pictured below is the Chinese Pond Turtle, also known as the Golden Turtle. 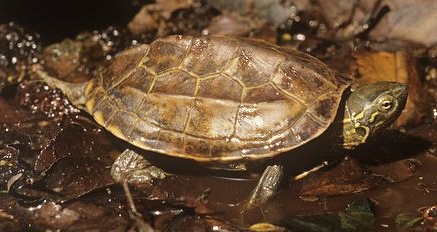 Turtles – which have the lovely name rubel (rus sbal) in Tibetan – also had a cultural significance in Tibet. Have a look at the metaphors and riddles of Padampa Sangyé attached to the redoubtable Tibeto-Logic site here. One asks “who drew the design on the turtle’s back; who was the artist?” Which brings us to the fact that the turtle depicted here appears to be without its shell. In fact it looks suspiciously like the artist had never seen a real turtle.

So, how to do the turtle divination? The instructions are quite straightforward, although you need to know what a lunar day is. You need to count the number of lunar days since the day you lost the thing, going around the points of the turtle, and then take the result from where you end up on the turtle’s body. If you lost the thing within thirty days, start at the head and go round clockwise. If it’s over thirty days, start at the bottom and go round anticlockwise. And if you don’t read Tibetan, here’s a translation of the body parts

The divination practice (mo) of the golden turtle: for finding things that have escaped or been mislaid.

Whichever lunar day it happens to be, calculate from the first day it was lost to the current lunar day, and the result is found in connection with where this falls on the body part of the turtle. If it was lost within the last thirty days, then count to the right from the head. If it is not within thirty days, then count going round to the left from the tail. Write the good or bad result at the turtle’s tail.

15 thoughts on “The Golden Turtle: A Sino-Tibetan divination manuscript”