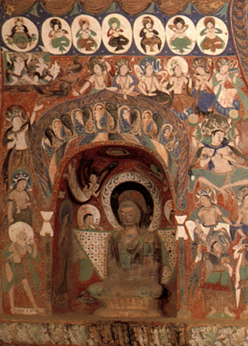 In several posts over the last year I’ve tried to point out connections between what we see in the Dunhuang manuscripts and the Nyingma tradition. The Nyingma lineages derived from the early transmission of Tibetan Buddhism, which our manuscripts represent, so these connections are not really surprising. In the Nyingma these early transmissions are known as kama (bka’ ma), to distinguish them from terma (gter ma), the rediscovered treasure tradition. Should our Dunhuang manuscripts be considered kama or terma? I suspect that they cannot really be considered either, because they lack one vital aspect of both of these kinds of transmission: a lineage.

Despite the lack of a lineage, connections between the manuscripts and the Nyingma traditions are clear. As I’ve discussed in previous posts, we have found Padmasambhava in the manuscripts, as well as fragments of his Seven Line Prayer. We have seen the growing importance of Avalokiteśvara (or Chenrezig), later to become the centre of the Mani Kambum treasure cycle. We have seen lists of the nine vehicles and the twenty-eight samaya vows, just as they appear in the later tradition. We have seen the influence of the Mahāyoga tantras, especially the Guhyagarbha, and of Dzogchen appearing here as the view of Mahāyoga.

Now I would like ask a different question: do the Dunhuang manuscripts have any relevance to the other main schools of Tibetan Buddhism? These schools, of which the main ones flourishing today are Kagyü, Sakya and Gelug, are all known as ‘new’ schools (gsar ma) to distinguish them from the ‘old’ lineages (rnying ma). The ‘new’ lineages came to Tibet from India from the late 10th century onwards, so any overlap with our Dunhuang manuscripts seems unlikely (remember, the library cave was closed at the beginning of the 11th century).

But in one fundamental aspect, the answer to this question is certainly yes. That aspect is the sutras. It is not often realized that over 90% of the sutras in the Tibetan canon were translated in the imperial period, that is, by the mid-ninth century. Thus all of the schools of Tibetan Buddhism hold lineages for the sutras that go back to the early period, and all of them are in this sense, Nyingma (that is ‘old’ rather than ‘new’)! The Dunhuang collection is full of sutras, the heritage of every Tibetan Buddhist school.

What’s more, the sutra-based oral instructions that the Kadam school propagated from the 11th century, simple contemplations on topics like impermanence, cause and effect (karma) and suffering, are also to be found in the Dunhuang manuscripts; in fact it was the particular wish of the emperor Trisong Detsen that these basic teachings of the Buddha be propagated in Tibet above all others. So in this sense, all of the Tibetan schools share a continuity with the earlier tradition, since all schools have their own kinds of contemplation on these topics.

Turning to the tantric manuscripts, we find that some tantras which are central to the ‘new’ schools were already present in the early period. The most important of these is the Guhyasamāja tantra, which is found among the Dunhuang manuscripts in a version that closely matches the one in the Nyingma tantric canon. This tantra was retranslated in the later period, but the similarities between the ‘new’ and the ‘old’ translation shows that the later translators were quite aware of the previous version, and relied on it when they made their new translation.

As for the Sakya school, there has always been an acknowledged Nyingma aspect of their tantric transmission, that is, the wrathful practices of the deity Vajrakīlaya. The Khön family, from which the heads of the Sakya school have always been selected, goes back to Khön Lui Wangpo, one of the first monks in Tibet, traditionally also considered a disciple of Padmasambhava. Though the Khön family later turned to the ‘new’ transmissions, they kept their lineage of Vajrakīlaya and his associated dharma protectors, as well with the lineages of the deity Viśuddha Heruka (one of the eight deities of the Nyingma Kagyé tradition).

Among our Dunhuang manuscripts are many texts on Vajrakīlaya, both practice texts and the short history that I quoted recently that tells us about Padmasambhava’s teaching of Vajrakīlaya practices. There are also many manuscripts on the wrathful Heruka. So of all the ‘new’ schools of Tibetan Buddhism, the most direct connections with the Dunhuang manuscripts are found among the Sakya, but it seems worth keeping in mind that every school has strong connections (if not always acknowledged) with the early period. It’s good to remember how much everybody has in common. I invite any other ideas about where such connections might lie, and I promise to chase up some more specific connections with the ‘new’ schools in the next posts. Consider it a New Year’s resolution.

3 thoughts on “Dunhuang and the ‘new’ schools”