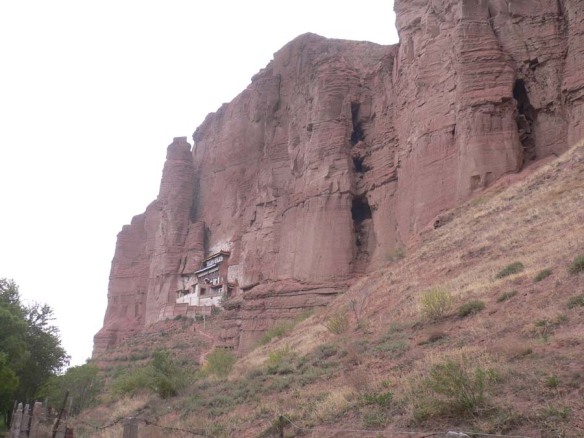 The first time I read Shakabpa’s Political History of Tibet, I was fascinated by a reference he made to the Kamalog, a group of Tibetan soldiers posted to the far northeastern borders of the Tibetan empire (now known as Amdo). Apparently, when the empire fell apart, these soldiers waited for orders to return but never received them. So they settled down, married, had children, and became Amdo people. Yet they and their descendants always remembered their Central Tibetan heritage.

When I was travelling in Amdo recently, I remembered the Kamalog. Looking through the massive Religious History of Amdo which I had picked up in Xining, I found a brief discussion of the topic:

During the reigns of the dharma king Tri Song Detsen and his fourth son Desongtsen, armies were raised on all the borders of Tibet in order to stop the opposing armies. With many hundreds of thousands of Tibetan soldiers, the meditation centres* of Central Asia were conquered. After that, nine heroes selected from the army for their ability were stationed at the border between Central Asia and Tibet. When they asked, “May we return?” the message from the king was, “Our edict once issued is irreversible.” Thus the descendents of these nine heroes were called Kamalog (“not to return by order”).  Much later, there arose many families of Tibetan nomads who were Kamalogs. Even Sechen’s great minister Sangha Ching seems to have been from a Kamalog clan. Those who became separated from the family line are said to remain in eastern Tsongkha, in the Kokonor basin.

The story, with its symbolically important number of nine heroes, has the flavour of a legend. But the general principle, that some soldiers remained in Amdo after the empire fell apart, is almost certainly true. Still, I wondered, as I passed through Kamalog County, halfway between the modern cities of Xining and Lanzhou, why has the story remained so powerful here in Amdo?

Some Amdowas (a mdo ba: people of Amdo) still trace their ancestry back to Central Tibet — including the Dalai Lama. In his first autobiography, My Land and My People he writes:

Although my family had settled in Dokham, my forefathers came from Central Tibet. How they came to settle in Eastern Tibet is a simple story. Hundreds of years ago, in the reign of King Mangsong Mangtsen, a Tibetan army was stationed in the northeastern part of Tibet to protect the frontiers. In our part of Dokham,† a garrison from Phempo in Central Tibet was stationed, and family tradition said that my forefathers came with that garrison. In our family dialect we still used many words from the Phempo district, rather than the east: words like cheney for bowl and khenbu for spoon.

This is not just a repetition of the story in the Religious History of Amdo. The Dalai Lama’s family tradition specifies which region of Central Tibet their ancestors came from. It also places the event further back in the past, in the reign of Mangson Mangtsen (c.643-676) rather than Tri Song Detsen (756-c.800). I couldn’t possibly confirm or deny the existence and significance of words from Central Tibetan dialects being used in Amdo. What’s clear is that there have been many traditions handed down in Amdo families that tell of an ancestral connection to the armies of the Tibetan empire.

On the maps of “ethnographic Tibet” — i.e. those that attempt to demarcate the extent of Tibetan culture rather than the political rule of Central Tibet — the Dalai Lama’s birthplace is at the very edge. In fact, the Dalai Lama’s first language, and that of his village, was the local Chinese dialect (see Laird 2007). Thus it seems that one of the things that the story of the Kamalog achieves is to bind these people of the borderlands to the centre. It brings the furthest reaches of Amdo into the great narrative of the Tibetan Empire, placing the heroes of the empire among the people of Amdo, and mingling the bloodlines of the Tibetans at the centre with the Amdowas at the border.

* Strange this. I wonder if sgom grwa is a textual corruption?
† Note that Dokham (mdo khams) is another name for Amdo, or for both Amdo and Khams.

And a link…
…to an excellent new website on the Amdo dialect.