Recently I spent some time at the British Museum looking at objects from the Tibetan forts of Miran and Mazar Tagh, where many of the Tibetan manuscripts that I work with at the British Library come from. The reason for the somewhat arbitrary division of textual and non-textual material from the same site across two different institutions goes back to the British Library Act of 1972. While the decision to separate the texts from the things made sense in that the British Museum simply didn’t have the space to house an ever-increasing collection of books, it also resulted – in the case of the finds from Miran and Mazar Tagh – in letters being separated from the pens that were used to write them, and the seals that were used to stamp them.

As for those seals (and if you are wondering, that’s what is pictured above), I saw these for the first time recently when Catrin Kost, who has been cataloguing the British Museum’s artifacts from Central Asia, asked me to have a look at them. When the seals (three in total) were first brought to the Museum by Aurel Stein, he had impressions taken of them, and these were read by L.D Barnett. The latter’s readings were not bad, but he let his imagination run away with him in the case of this seal, which he read as a Tibetan version of the Western name Anthony (‘Ang to ne)! In fact, these Tibetan syllables seem to be a Chinese name (Wang to ne). As you can see from the image, the name ends with a swastika, and sits on a lotus blossom. The three seals are all made from animal horns, with a hole bored through the midpoint, probably so that they could be carried on a string or leather thong. I’m not sure what animal such horns might belong to – though this might not be clear from the photo, they are very small, only about 3 inches long. 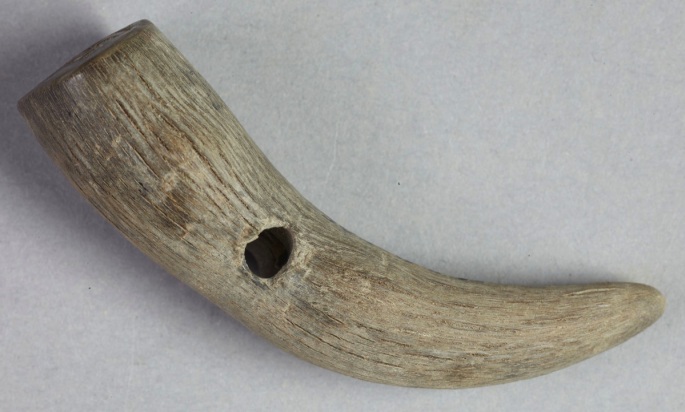 We find stamps made with this kind of round seal in lots of documents from Miran, Mazar Tagh and Dunhuang. The round seals are always used by private individuals, in contrast to the larger, more impressive square seals used by officials (see this post for some examples of those). These personal seals would function like a signature on legal documents, like contracts and receipts. Pictured below is a receipt for the repayment on a loan of wheat (IOL Tib J 844), with the seals of three people involved in the transaction.

Since they were found in a Tibetan imperial fort, these seals should date to the first half of the ninth century — so they are by far the earliest examples of Tibetan seals. As far as I know, later examples are all made from metal, as in this picture from a Chinese exhibition (but note also the presence of holes in the middle of many of the seals, and the leather thong tied through one of them):

So, let me finish with an attempt to read the names on the three seals.
1. MAS.606 (pictured at top): this seems to be Wang To ne, certainly a Chinese surname, and probably a Chinese personal name as well.

2. MAS.607 (pictured above): Written in the four spaces marked out by a swastika, we have the Tibetan clan name Gnyos followed by Lha la brtsan. I’m quote sure about the brtsan but not so much about the lha la, if anybody else wants to try their hand, or eye. Barnett read it as khal. 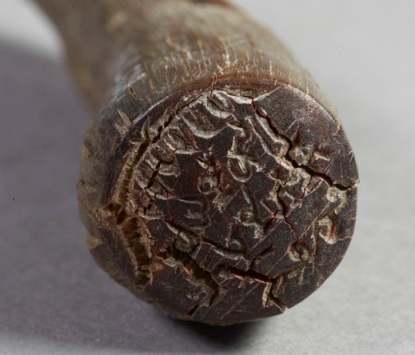 3. MAS.608 (pictured above): This seal is now quite damaged, but if you click on the link to the IDP site, you can see a the imprint taken by Stein. The name I see is ‘O nam Gnyan lha, a clan name (‘O nal) that we also see in the Miran documents, and a common imperial period personal name (Gnyan lha). Similarly to the first seal, the name is flanked by swastikas and sits above a lotus.
*  *  *
Further Reading
British Museum: Search the Collection – if you type in the seals’ numbers here (e.g. MAS.606) you can see the full description by Catrin Kost, which includes my own readings.
Aurel Stein’s description of the Miran site and its artefacts, as well as the seal impressions are in: Stein, Mark Aurel, Serindia, Oxford: Clarendon, 1921 (vol.1, p.480).
Images
The beautiful new photographs of the seals shown here are all by IDP photographer Rachel Roberts, and are (c) The British Museum.