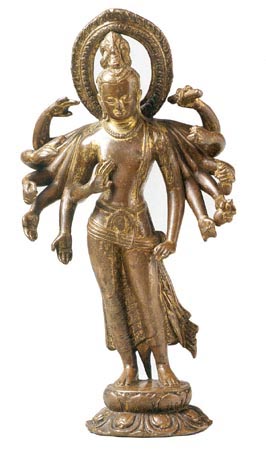 As I discussed earlier, Avalokiteśvara (Chenrezig for Tibetans) was a popular bodhisattva in Tibet before the 11th century. His role in the transforming the old Tibetan funeral rites into Buddhist ones has been discussed by several scholars. My own recent research has focussed on Avalokiteśvara’s role as a tantric deity during this early period. In his simplest aspect the bodhisattva has one face and two arms. In the Dunhuang manuscripts we also find:

These forms of Avalokiteśvara are found among the Dunhuang manuscripts in dhāraṇīs, in hymns (stotra) and in practice manuals (sādhana).

There are at least seven different Avalokiteśvara dhāraṇī texts dedicated to the eleven-headed form, the thousand-armed form, and the Amoghapāśa form. The dhāraṇī spells are mostly variations on a single theme, beginning Oṃ Āryāvalokiteśvarāya Bodhisattvāya Mahāsattvāya Mahākarunikāya. Many of these dhāraṇīs were also translated into Chinese, attesting to the popularity of these forms of Avalokiteśvara in China before they were eclipsed by the development of the female form of Avalokiteśvara.

There are two hymns to Avalokiteśvara found in the Dunhuang manuscripts (they exist in many manuscript copies, so must have been popular at the time). The first hymn praises the 108 qualities of the bodhisattva. The second hymn is to Cintāmaṇicakra, whose maṇḍala is described as an embodiment of the mind’s true nature:

If you meditate on this maṇḍala of mind itself,
The equality of all maṇḍalas,
Conceptual signs will not develop.
Conceptualization is itself enlightenment.
With this non-abiding wisdom
All accomplishments will be perfected.

Among the practice manuals, we find or sādhanas based on the Yoga tantra Sarvatathāgata- tattvasaṃgraha. We also find a Mahāyoga sādhana with a red Avalokiteśvara and the goddes Pāṇḍaravāsinī as his consort.

To sum up, Avalokiteśvara was an important presence in Tibetan Buddhism by the 10th century, as an object of devotion, a tantric deity, and a guide for the post-death state. Advocates of Avalokiteśvara in the later diffusion of Buddhism in Tibet, such as Atiśa, may have introduced new texts and forms of the Avalokiteśvara, but the bodhisattva was already well-established in Tibet before they began their work.