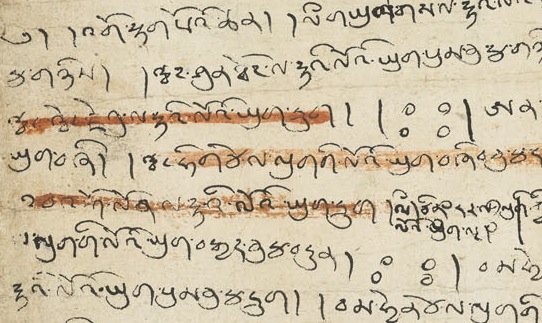 This document (IOL Tib J 1354) gives us some real insights into how scribes and their managers worked. The document relates to a particular order for Prajñāpāramitā sūtras paid for by the Tibetan prince (lha sras). The sutras have been copied, and now it’s time to reckon how much paper has gone missing, and to get the scribes who have lost paper to pay the authorities back. The disciplinary work is done by a supervisor (gnyer pa) who is responsible for making sure the scribes pay back the paper they’ve lost.

Any scribes who fail to do so will be in trouble. The supervisor has the authority to kidnap one of their relatives and hold them hostage until the repayment is forthcoming. He can also impound their property and cattle. This interestingly suggests that the scribes were householders, and that their scribal work was done under the threat of serious punishments. Another punishment menioned here is whipping: 10 lashes for each missing batch of paper.

After setting out these rules, the document goes on to list 50 local scribes (all of whom have Chinese names) and the amount of paper allotted to each of them. Scribes were actually allowed to waste some of their paper; this scrap paper was known as legtsé (glegs tshas), and may have been the cover (i.e the top sheet) of each of the batches of paper alloted to the scribes (this is Takeuchi’s suggestion). We have several examples of this scrap paper in the Dunhuang collections. Inevitably they were used by scribes for doodling, writing exercises, or writing practice letters. Several letters are found among the scrap paper (presumably rough drafts) indicating that the scribes made extra earnings by writing letters for others.

Scribes often marked their scrap paper as their own by signing it. We find, for example, written right in the middle of one piece (Pelliot tibétain 1166): “This is the scrap paper of Liu Lutön (Li’u klu rton).” Scribes also wrote contracts for loans between each other. One such contract between two scribes (IOL Tib J 1274), gives some insight into the tools of the scribes’ work. One scribe wants to borrow some paper and wrapping cloth from another. If he fails to repay, the borrowing scribe will have to forfeit his inkpot and handkerchief.