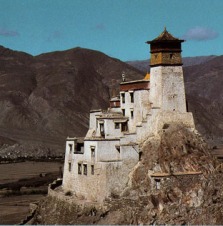 I’m Sam van Schaik, based at the British Library, where I am currently a principal investigator in the project Beyond Boundaries: Religion, Region, Language and the State (ERC). My previous research projects include Tibetan Zen (British Academy) Tibetan and Chinese paleography (Leverhulme) and the Tibetan tantric manuscripts from Dunhuang (AHRC).

I created this site between 2007 and 2014 as a resource for the study of the history of Tibet, mostly from the “early” period of the 7th to 10th centuries, but with occasional forays into more recent events. Most of the time, my source material has been the manuscripts discovered on the Silk Road and kept at the British Library and elsewhere. The posts here record my discoveries, thoughts, queries, and things I have wanted to share.

Although I gradually ran out of time and energy to continue adding to this site and moderating comments, I intend to keep it here for as long as possible. Also, see here for my recent work in publication.

All words here are © Sam van Schaik. If quoting from this site, please cite the URL for the particular post you’re quoting. Except where noted otherwise, all images on this site are from the IDP website and are © The British Library or the Bibliothèque nationale de France.

Manuscript Numbers in the Stein Collection
One of the difficulties in accessing primary sources is the way they are numbered by their holding institutions on the one hand, and by the scholars who refer to them in their articles, books or catalogues on the other. Here in this article I have tried to clarify the many and wonderful ways in which one can refer to the Tibetan Central Asian manuscripts in the Stein Collection at the British Library.