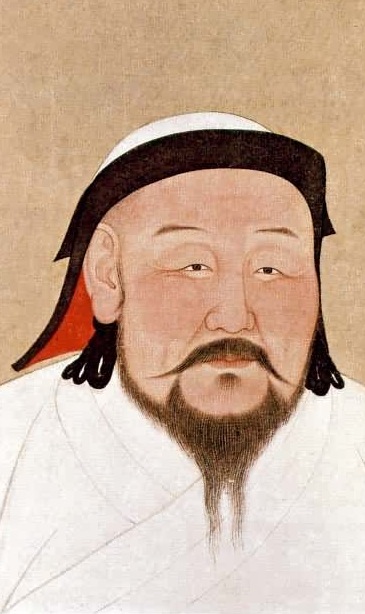 I think it might be fair to say that Tibetan Buddhism hasn’t often come into direct conflict with other religions. And although I’m all for the harmonious coexistence of religions, I find the few instances of head-on confrontation quite interesting. So let’s look at what happened once when Buddhism and Daoism came to blows.

It was in the cosmopolitan court of Kubilai Khan, during the height of Mongol power. There was a new, vigorous school of Daoists, called Quanzhen. The school had been founded in the eleventh century, and by the twelfth it already had 4,000 monasteries and 20,000 priests. The school advocated an inner alchemy which rejected the use of elixirs, previously popular with Daoists, in favour of cultivating one’s inner nature (xing) and life-force (ming). More to the point, they were quite enthusiastic, shall we say, about propogating their religion.

During the 1250s, Quanzhen monks were roaming around China taking over small Buddhist monasteries and converting them to Daoist ones. Even worse, they were piling up the sacred books of these monasteries and burning them. They were also hanging around at the Mongol court, like everybody else, looking for patronage. It was here that the Daoists and the Buddhists started to squabble. Kubilai’s predecessor Mongke Khan convened two debates in 1255 and ’56 which the Buddhist side was represented by a mysterious monk called Namo. The second Karmapa, Karma Pakshi was at Mongke’s court at this time, and took part in the debate of ’56.

These were opening skirmishes. It was in the reign of Kubilai that the decisive debates took place. The monastery-occupying and scripture-burning activities of the Daoists had not abated. And now, adding insult to injury, they were also circulating printed copies of the Laozi huahu jing, a polemical text telling the story of how the found of Daoism, Laozi, travelled to India and invented Buddhism there as a lesser doctrine for the barbarians.

Kubilai’s imperial preceptor at this time was Chögyal Phagpa, the head of the Sakya school, and by the Khan’s command, ruler of Tibet. Phagpa was upset by the Daoists’ activities and asked the Khan to convene another debate. This time, the stakes would be higher – the losers would surrender their own scriptures to be burned.

We know that this debate really took place in the summer of 1258, thanks to Chinese and Tibetan historians. We also have Phagpa’s own account of it – “Verses on the Defeat of the Quanzhen Teachers” –  preserved in his collected works….

Urged by the Lord of Men himself,
Who possesses a great analytical mind
And increases merit and well-being everywhere,
The arrow transmitting the authentic scriptures,
Tipped with the vajra arrowhead of logic,
Was placed on the bow of analysis
And shot by the archer of inspired speech.

The Lord of Men is Kubilai, the secular parallel to the Lord of Sages, the Buddha. After offering his patron suitable praise, Phagpa characterizes himself as a sacred archer with an impressive extended metaphor. But did Phagpa’s arrow hit its target? He doesn’t tell us straight away, but instead goes on to desribe his Daoist opponent:

By striving on the path of the seer,
He has gained eyes of clairvoyance
And the powers of magic,
But due to the imprints of his countless previous lives,
He believes that the self exists in the material aggregates.
Thus he will never be a vessel
For the path to liberation.

This supreme teacher of the Quanzhen school,
Followers of the one they call Lao Jun,
Is well-versed in the texts of his tradition,
But has become completely intoxicated
By pride in his considerable fame,
And has looted and burned
Our books of scripture.

The name of the Daoist who went head to head with Phagpa is not preserved in any of the histories. A pity, since he was obviously well-known at the time. For Phagpa his first crime is philosophical: since he believes in the existence of a self, he will never understand Buddhism, the philosophy of nonself. His second crime is the pride that has led him to burning Buddhist books. So, who won?

Applying the elixir that transforms
The iron of a sound intellect
Into the golden teachings of the authentic scriptures,
I turned him into an upholder of the vows
Of the excellent yogic conduct of the Sage.

Ah, Phagpa won, and it seems his opponent, in the traditional way, converted to Buddhism. In fact, in the colophon Phagpa states that seventeen Daoist monks converted to Buddhism. By the way, did you see what Phagpa did with the metaphors in this verse? Rather sarcastically turning the Daoist tradition of alchemy against his opponent, Phagpa characterises his own Buddhist logical arguments as a kind of alchemy, transforming his opponents iron-like intellect into the golden Buddhist teachings. From archer to alchemist.

Phagpa ends by hoping the the news of his victory helps others turn to the Buddha’s path:

The learned enjoyed this very much,
And because of their enjoyment, news of this
Spread to the limits of the sky through the realms of men.
May this help all beings on the wrong path,
Or with no path, to enter the teachings.

What he doesn’t mention is that the after the debate, 45 Daoist scriptures were burned. Presumably these were the Daoist books kept at the Mongol court. That wasn’t the end of the problem. Another debate was convened in some decades larer, in 1281 (after Phagpa’s death). The Buddhists won again, and this time the entire Daoist canon (except for the Daodejing) was burned. And though that does seem to have been the end of Daoist influence at the Mongol court, it wasn’t the end of the Quanzhen school. They survived and remain to this day the largest school of monastic Daoism.

For the sake of completeness, here’s the colophon to Phagpa’s verses:

In the past in China, the one called Tawo Shang Lao Jun was born after 82 years in his mother’s womb, and delighted in solitude. Striving for meditative absorption, he attained clairvoyance and magical powers. He gave advice on this path of his to students, and a religious system similar to the Śāṃkhya arose. His followers grew very numerous and came to be known as the Quanzhen school. Seeing that they were doing harm to the teachings of the Sūgatas, the Lord of Men Kubilai commanded a refutation this false system. On the 23rd day of the midsummer month of the male earth horse year (1258), Phagpa, having studied for a long time to achieve expertise in our own philosophical system, defeated seventeen [teachers] who became monks. This has been written as a commemoration.

16 thoughts on “Phagpa’s Arrow, or Buddhists vs Daoists”